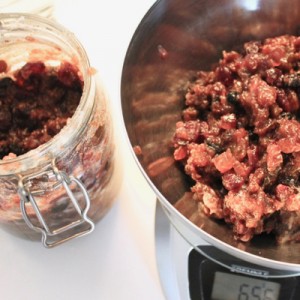 Well, this is the magic of British Christmas.

Mincemeat is the basic preserve you need to make amazing Christams sweets and treats in Britain, such as pies or puddings. I fell in love with it when I lived in London years ago. The taste feels something like Grandmother’s ovens. In origins it was made with fruits, sugar, vinegar, wine, fat and meat. Yes, meat (the name tells it all!). Today meat is rarely part of the recipe, pork suet instead is the only fat (so a connection with its meaty origins is still there).

Mincemeat is in the category of preserves and must be consumed in pies or puddings and if you want also with very savoury cheese.

It preserves like this up to 6 months and as per all preserves the more it ages, the more it gets better. Vegetarians can substitute suet with vegetable suet.

a pinch of ground chives

mix the fruits with 100 ml of brandy and set aside for 1h. Drain the fruits and squeeze them with a cloth (retain all the liquids in a separate bowl and add the brandy left over – 30 ml).

Add to the fruits the rest of ingredients (excluding the drained juices). Mix well and put in a heat-proof container. Heat in oven at 100° C for 2H15 (the suet will melt down completely).

Take out from oven. Drain the exceeding fat (but retain it in a separate bowl). Let cool. Add the juices+brandy mixture, mix well and pot the mixture in a airtight container, press well and cover with 1 cm of retained fat (discard the rest). Seal the containers and set aside.

Consume after 1 week and within 6 months (it keep well preserved in a cool and dry place).